Fuel it Up! Automotive to Fuel Power Semiconductor Growth

The global market for power semiconductors used in cars and light passenger vehicles will grow by more in $3 billion USD in the next six years,” according to new analysis released today by IHS Markit, a world leader in critical information, analytics and solutions.

End to end markets that stimulate overall demand for semiconductors are expanding. As silicon-led technology exerts, its influence on many different aspects of life. The automotive sector promises to be a particularly dynamic driver of growth for the semiconductor industry. Not only is the semiconductor content of cars growing rapidly as they rely on greater intelligence, connectivity and sophisticated electronics, but the nature of the automotive industry model is also shifting in new directions.

The Latest Report Released By IHS Markit Predicts That The Global Market For Power Semiconductors Used In Cars And Light Passenger Vehicles Is Estimated To Grow By More Than $3 Billion USD In The Next Six Years.

Contributing to the rise of power semiconductors, the automotive industry’s mission is to offer self-driving, ‘green’ and connected cars, by the next decade.

The key drivers behind the robust growth include the electrification of vehicles, as well as self-driving, green and connected cars, according to the “Power Semiconductors in Automotive – 2017” report.

According to IHS Markit, intermediate safety milestones such as automatic emergency braking (AEB) and platooning are necessary to realize a road system that will accommodate self-driving cars. Other factors in the trend toward more power semiconductors include the need for more fuel-efficient systems, reflected by increasingly electrifying auxiliary units such, a higher proportion of electric vehicles, and more electronic content per vehicle as required for improved vehicle emission levels. 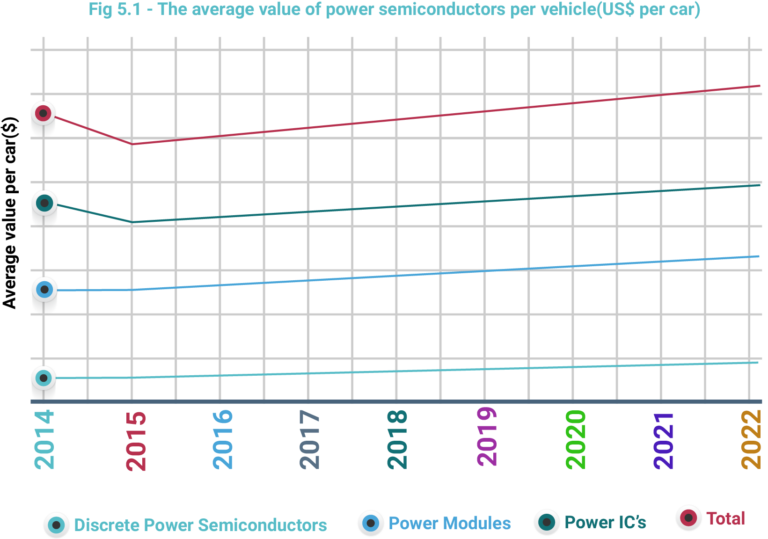 It is anticipated that the growth in sales of hybrid and electric vehicles in the next few years will spur power semiconductor sales to climb by CAGR 9.6% from 2015 to 2022 across all vehicles, taking Powertrain’s market share up to 54% of the total market, the report says. Discrete IGBT power transistors account for most of Powertrain power semiconductor revenue, but increased integration of discretes into modules will cause IGBT power module sales to increase at a much faster rate.

Cars and chips. Less than a decade ago this would not have been the most obvious of pairings, but this will be a key driver of our industry today. From self-parking cars to anticipatory braking, semiconductors have been important to automotive innovations in the past decade. As a result, automotive semiconductor revenue is growing at nearly twice the rate of the overall semiconductor market.

MosChip Has Been Leading The Semiconductor Market With Constant Innovation To Drive Automotive Industry. With An Approach To Adopt The ‘Green-Car’ Concept, MosChip Contributes To The Environment, Safety And Comfort.